It was a beautiful day.  The sun was shining and the sky was a gorgeous blue.  As we approached Shanksville, I noticed, white streaks of vapor, contrails, evidence of the planes soaring above.  Hashtags in the sky on a peaceful, weather perfect day.  I imagine September 11, 2001 looked much the same in this scenic Pennsylvania community.

When arriving at the Flight 93 Memorial, visitors first encounter a black sidewalk showing the pathway of the flight to the crash site.  There is a somber presence in the air as the events of 9/11 are reviewed in artistry on the grounds and in the Visitor Center.  There are phones to listen to the last messages from these passenger heroes. I say “passengers”, because this was no longer a US plane, it had been commandeered by a foreign entity.

One debates with their-self, “Do I really want to hear these precious final words spoken to their loved ones?”  I decided that I would, but found it heartrending to listen for long. Short powerful messages of love, filled with courage and uncertainty, made you appreciate the strength and determination of these few. I was proud to be a fellow citizen along side of the heroes of flight 93, and grateful to the families, for sharing these intimate few second.  It may seem a bit macabre, but It was one of the most moving parts of our visit. It made their sacrifice hit close to home. It helped one understand their motivation.  Their take off was delayed, the flight 93 terrorists were off schedule, and that’s how the passengers found out about the fate of the other planes. If they did nothing, they certainly would die; however if they tried to thwart the terrorists, they had some hope of life, or at the very least a better outcome for those they left behind. One couldn’t help but take inventory themselves…What would I say or do?  They’re decision  was unanimous. They would take action.

One thing that I am certain of, without any official information, there was prayer.  On the plane or on the ground, no matter one’s declaration of faith, possibly your first time to try, this was a time for prayer.  The sacrifice of these few, the 40 plus one (an unborn baby) changed a nation. The “black boxes” were recovered only on this plane, and no others from the terrorist attacks. That alone changed security and air travel, helped to identify who the assailants were, and provided voice recordings of the struggle to regain control. We were united as a nation through these few, “minute men” to fight back. I was inspired to self evaluate, if in the face of my own mortality…

What would I have done?  I hope that I would have chosen as they did.  I hope that I can carry that same sentinent in my daily life, in the epic battle of good and evil in our world every day. That I too may choose with courage,  bravery and valor.

For our military, each fold of the American Flag has meaning. 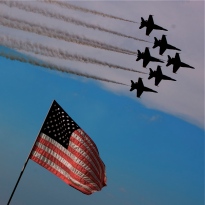 This day we honor those who have died to protect us.  It will be full of American standards: cook outs, family gatherings, and hopefully thoughts of gratitude.  War is such a disturbing thing.

My father fought in WWII.  He went in an 18 year old boy determined to do his part.  He came home a man forever changed by what he experienced. He wouldn’t talk about it much, but he lost part of himself there. He witnessed men dying beside him, but still had to keep his post.  He watched a massacre on a beach, then had to go up that beach himself.  He walked through the streets of Paris to the sounds of boos. His body was a host to parasites, physical strain and absolute fatigue.

My father came home with his life, but a part of himself was left there.  Today, I mourn those losses too.  I pray for those, who made the ultimate sacrifice, for their families, for their legacy.  I pray that we may never lose sight of what these young men and women are prepared to do, to keep us safe, and that they are safe themselves.  I am grateful for these fallen heroes, who gave their lives that I might have mine.

I wish you all a Memorial Day of gratitude, appreciation and humility…that we may celebrate these heroes with the honor their ultimate sacrifice merits.